Pro Series Components’ roots began in Indiana some 50+ years ago and have touched many well-known companies and people. Centered around the mind and skill of Reuben “Indiana” Jones, (with family in tow) this is how the story goes…

From starting at a young age of 10, I put a Briggs & Stratton engine on my trike. Things began to domino from there. Around 15 years later, I had an established and reputable engine shop (Creative Car Clinic in Terre Haute, Indiana) that made blower and drive components.

One day, Wally Larson walked into my shop and presented me with his patent-pending, 2 piece valve cover that he wanted to further develop, manufacture, market and distribute. With an already developed product line of my own, the transition would be easy and would further complement my existing products.

Let’s fast forward 18-24 months. I decided to buy the patent, existing product, and Wally’s stake in our partnership, as well. I continued to push the sale of the Larson product and spent downtime retooling and continuing to develop the product line. This led to changing the company name to Induction Engineering.

As Induction Engineering started to blossom, Dick Moroso, of Moroso Performance Products, took notice and showed interest. He would soon offer to add Induction Engineering as a division of Moroso Performance Products, and I joined their research and development team. During this time the warehouse distribution (WD) network was popular and was the current wave that propelled the jobbers and speed shops across the US. The new idea was to develop a two-step program with a direct-sell-to-public structure. This new structure paved the way for modern selling.

As time went on, numerous creative differences arose, and I decided to leave Moroso Performance Products. However, Induction Engineering remained in their hands.

I soon relocated to southern California and was contracted by Willie Rells to build certified NHRA Pro Stock cars. This would have been circa 1987. With the start of this venture, I began to meet a lot of racers, which helped us procure a line of chassis components dedicated to other chassis fabricators. This led to the building of Bob Glidden’s infamous 1989 Ford Probe, and, thus, the birth of Pro Series Components.

I soon found myself in negotiations, which would prove to be a pinnacle in my career. Jerry Weigart, of Vector Aeromotive, wanted me to come to join in his dream and build America’s first supercar, the Vector w8. I had met Jerry at the SEMA show in 1986 when he showed interest in the Induction Engineering valve covers and wanted them on the Vector W8.

In 14 short months, we took the Vector from zero to LA Car Show and had a total of 18 monocoque chassis, ready for bodies. This chassis was already exceeding the standards of crash test ratings for 1995 (keep in mind, this was 1989). Soon I made a set of valve covers that were fashioned for the Vector W8, as well as heat shields for the headers. It was a whirlwind of creativity, ingenuity and hours that makes me think back and finally realize the history that was made in such a short time.

After leaving Vector Aeromotive, I began to hone my skills a little differently and focused on the structuring of Pro Series Components. I began to develop prototypes for different industries. For Lincoln Food Products, I made vented lids for Pizza Hut for their BIG New Yorker Pizza. This allowed the pizza to go through their ovens and prevented the top from getting burned.

Along those same lines, a tomato slicer was developed for McDonald’s through Lincoln Foods, as well as a waffle iron for NEMCO that can now be seen on display in every hotel lobby. Pro Series Components’ pedigree for product development continued with one-off, fuel injection plenums for Lingenfelter Performance Engineering, where I worked directly with the infamous John Lingenfelter.

Simultaneously, I developed a new, on-the-head valve spring changing tool, after seeing a need for a newer, innovative design that eliminated chassis restrictions. After developing a tool and getting them in the hands of the right people, such as Larry Morgan, Jason Line, Greg Anderson, Richard Maskins, and Earl Gaerte, I was able to enhance the versatility of the tool.

Let’s talk about Bill Smith, founder of Speedway Motors. I first came in contact with Bill in Larson valve cover days. Talk about someone who was a legend already! A self-made guy that knew what it took to make a business thrive, he was my first BIG order of valve covers.

From that point, over the next 20 or so years, Bill would stay in contact with me. We always talked about teaming up and developing products. Finally, in 2002, I became a Cornhusker and moved to Lincoln, Nebraska to make his dream a reality. I was hired as Vice President of Research & Development and was under direct advisement of Bill.

During this 3 year undertaking, I pushed out 52 products from pencil sketches to fully engineered products that were in production and launched into Speedway’s catalog. One of which I am most proud of (and I believe to be one of Bill’s favorites) is the Tru-Ram® exhaust manifolds.

As previously mentioned, my family was in tow. My wife (Kiva) was my high school sweetheart. I started dating her when she was 14 years old. We couldn’t be separated, and still can’t. She was beside me every step of the way and has assembled, painted, and polished valve covers. She has done whatever it takes to help out. She has made sure I was fed, clothed and tended to.

My endeavors led us from east to west coasts and everything in between, and her unwavering support made it possible to keep going. My children, Brandy and Jeremy, grew up in every shop I worked at. They meshed with the company I kept, whether it be having roll cage padding fights with Dick Moroso, or being babysat by Robby Moroso.

My firstborn, Brandy (1978), was the first grandchild on my wife’s side and got spoiled rotten. From a young age, Brandy showed the nurturing side just like my wife. So much so, that from very early on she knew she wanted to be in the medical field and help people.

Brandy received her technical certificate as an LPN in July 2005. She has since worked in many different areas, which include Family Medicine, an Ear Nose & Throat Specialty Office, Home Health Care, and at an OB office. She was also a phone nurse for a major orthopedic group in Fort Wayne, Indiana.

Brandy has made me a grandpa 3 times over. She had her first daughter, Amber, in 1997, her son, Naythan, in 2001, and her youngest, Danika, in 2007. Now that her kids are getting older, you can find Brandy hanging out on the lake, enjoying some local breweries, hanging out with friends, and traveling when she can.

My boy, Jeremy (1980), started to follow in my footsteps. He grew up around fabrication and custom work, which helped shape his creative side. However, he took a different route in getting there. Since picking up a pencil, he drew cars and ideas (already thinking of ways to make things better). 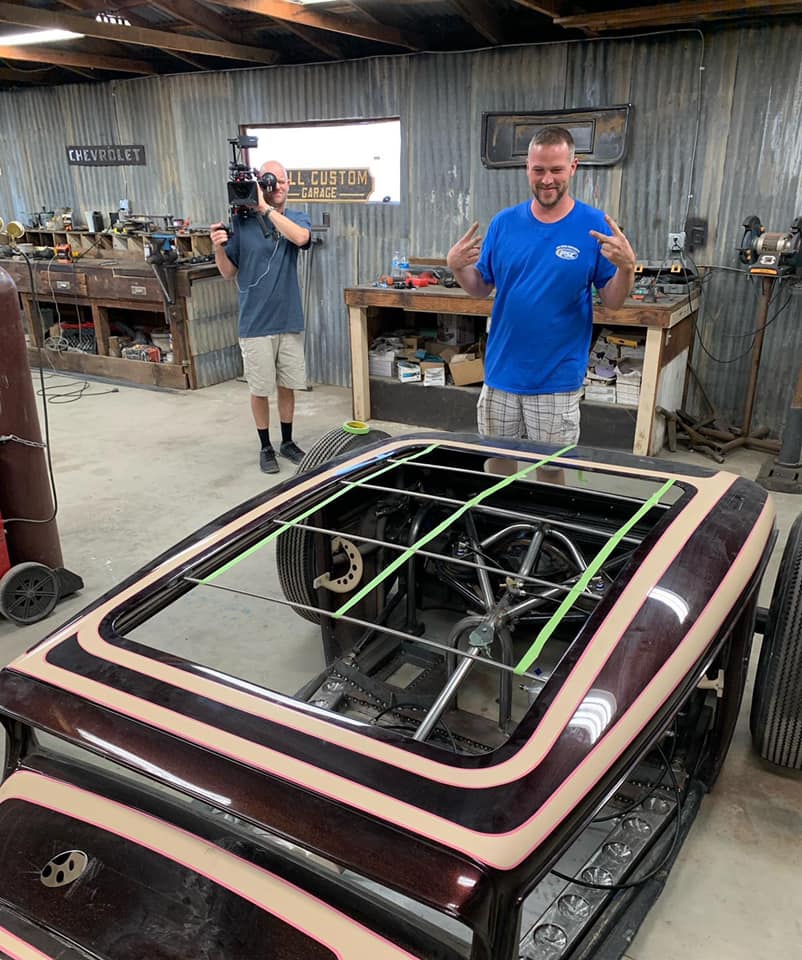 Working at Pro Series Components in between classes in college, he paid his way and obtained a Bachelor’s Degree in fine and commercial art (with honors), at the University of Saint Francis, in Fort Wayne, Indiana. After working in that respective field for 10 years, he realized he missed being in a shop and creating on a different level. He traded his suit and tie for some blue jeans and t-shirts and started a different kind of work.

Jeremy has a real eye for design and aesthetics and takes that part to the extreme. One of his biggest undertakings is a car that was based on a 1933 Ford roadster, but with some amplification. Fitting the 6-71 blower and a prototype fuel injection under the tight space of the hood, raking the front grill shell and windshield pillars, as well as drafting headlights into the side panels, all contribute to making this car quite unique.

Another design that illustrates his design skills is our 1967-1968 Chevrolet C10 hood. The drop-down vents that act as heat exchangers, as well as the different inserts available, all make it an eye-catching showpiece.

He has also been instrumental in the new LS version of the valve covers, along with the cast version that’s on the verge of being released.

In 2019, Jeremy was involved in a car build with Ian Roussel and Full Custom Garage TV show. During the process, a new chassis was built for an existing body. The car is called Space Junkie 1.5 and is currently in the works to be completed soon.

This is a shortlist of the major projects and events that have helped define my career. The number and variety of people we’ve met and worked with have given us a great network full of knowledge, experience, creativity, and reliability. They are people we can count on in any situation/endeavor. The ‘know-how’ needed to get it done is only a conversation away.

All in all, I would say the book I’ve been writing here is a piece of history. I’ve learned a great deal from my history: what to do, what not to do, and how to evolve. My history is filled with benchmark events that changed and shaped my future, as well as that of others.

After 50 years of history, there is still so much to look forward to and so much more work to do. Pro Series Components is still writing its story, so please stay tuned.